The maximum thrust load - including shock - that can be applied to the ball nut without damaging the assembly.

The thrust load in pounds which, when applied to the ball nut and rotating screw assembly, will result in a minimum life of 1,000,000 inches of travel. Metric screw designs are per ISO 3408 and show the load ratings in kilonewtons for 1 million revolutions.

A load that tends to "stretch" the screw.

A load that tends to "squeeze" the screw. 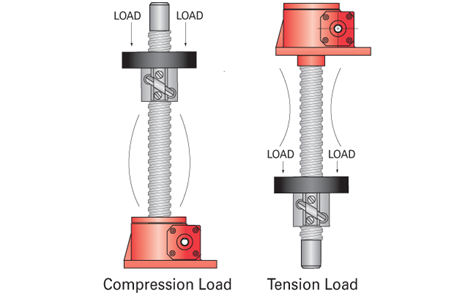 A load that tends to rotate the nut radially around the longitudinal axis of the screw.

A load parallel to and concentric with the axis of the screw.

CAUTION: Although a side load will not prevent the ball screw from operating, the nut is not designed to operate with a side load, such as those generated from pulleys, drive belts, misalignment, etc.

A load parallel to and concentric with the axis of the screw. 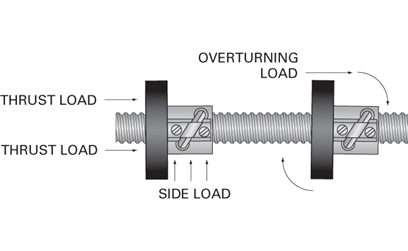