Like all set up components in auto racing, there is no 'magic' winning adjustment; each of the car's pieces needs to work in concert as a single unit to maximize a particular diver's feel. That's the case with NASCAR Sprint Cup Series COT's (Cars of Tomorrow) modern spring and bump stops. The coil binding and micro-cellular polyurethane bumpers are an integral part of the suspension workings that are inserted into the front shock shafts to control the travel.

Often overlooked, the spring and bump rubber rates are an increasingly vital part of the suspension performance. Essentially, the spring and bump stop rubber size/stiffness ratings, and shock travel combine to allow the front suspension to move during corner entry to nail the splitter to the track in the corners. Having good data acquisition readings on the assorted spring and bump stops in use is an invaluable commodity that can put the shock back into a proper and optimal operating range.

The SBSR was originally developed as a prototype three years ago to replace the traditional hydraulic testing systems that were noisy, messy, and inaccurate. These Hydraulic systems lacked the necessary precision required for repeatable increments to deliver complete motion control, which is needed to coordinate chassis geometry measurement and data acquisition.

The complexities and advanced capabilities of the SBSR system depend on the accuracy and precision of its linear motion system. ETG sought out the most precise, accurate and powerful lifting system in the world, The ActionJac™ Screw Jack system. Manufactured by Nook Industries (Cleveland, OH) the ActionJac Machine Screw Jack provided the exact support needed to bring the SBSR into fruition. The Nook Precision Actuator Group worked closely with the ETG team to assess needs, make adjustments, and pair the correct solution with the SBSR system in making this project a success. Coupled with a servo-driven motor, the 5-Ton (5-MSJ-UK) worm gear driven ActionJac Screw Jack system provides pivotal 'up/down' motion in small, precise, and repeatable travel increments to test the vertical forces acting on the spring and bump stops on the racetrack ultimately providing a dynamic rating to control the displacement algorithm.

The SBSR implements a top load cell which measures the load and displacement as they compress the bump stop (or coil spring for lower series racing). The ActionJac and servo motor controls the 'up/down' motion within a variety of controlled travel scenarios and test configurations. The ActionJac is also self locking and holds to a specific set point.

The ActionJac is a time tested series originally developed in 1969 for precision all-scale satellite actuation. It has been continuously perfected throughout the years and comprises unforgiving lifting power coupled with unparalleled precision. The ActionJac has become known industry-wide as the most reliable source of lifting actuation and is backed by a multi-year, iron-clad warranty. Nook's ActionJac (5-MSJ-UK) features a lifting shaft comprised of alloy steel with a minimum tensile strength of 95,000 psi. Manufactured with a lead accuracy of approximately 0.004" per foot, the 5-Ton ActionJac (5-MSJ-UK) provides a 24:1 gear ratio and a reliable load handling capacity of 500 lbs. per inch of travel on the repeatable spring bump stop test.

ETG provides a variety of engineering services and parts needs to more than 30 teams in the NASCAR Sprint Cup, NASCAR Nationwide Series and Camping World Truck Series racing community, and their SBSR is gaining interest from a number of teams. Currently, two SBSR's are in active operation with great results and ETG is now offering the unit for commercial sale.

According to ETG's Test Engineer Keith Lindgren, "ETG has perfected the system with Nook's ActionJac and servo motor allowing us to test repeatedly for specific circumstances." Lindgren also noted that 2010's Daytona 500 winner Jamie McMurray utilized the tool on his Chevrolet Nationwide Series Car in preparation for the race. 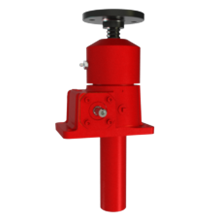