As the dramatic and pivotal stage of an upcoming National Conventions approaches, streamlining the staging of these massive events historically has never been a small task. That was the case with Chicago Scenic Studios, Inc. (CSSI), a leading provider of scenic theatrical systems, who faced the daunting challenge of transforming the Boston Fleet Center into a spectacular convention hall for the National Convention.

One of the major engineering hurdles of the set design was the development of an automated system for raising and lowering three main podiums, slip stages, and monitor walls. The most technical challenge was vertically lifting and retracting two transparent, 300-pound podium backing acrylic walls, each of which contained a series of flat-panel video monitors within the top portion of the walls, so they can be hoisted away from the set with rigging.

The ActionJac™ product line is time-tested and was originally designed and applied in the 1970's for the booming home direct-satellite market. Each model in the ActionJac line incorporates a rugged worm gear set arrangement that uses an alloy steel worm, which drives a high strength bronze worm gear (drive sleeve). The worm shaft is supported on anti-friction tapered roller bearings with external seals to prevent loss of lubrication.

The addition of a high efficiency ball screw and nut reduces the required input torque to approximately 1/3 the torque required for Machine Screw Jacks. Used individually or in multiple arrangements, each Worm Gear Screw Jack is built to specification with customized travel lengths and reliable load handling capacities ranging from 1/4 ton to 100 tons.

With 16-foot high walls, and a 30-foot studio ceiling, CSSI needed a means for cutting the height of the wall in half by lifting and retracting the lower portion inside the upper portion so the collapsed eight-foot wall could be removed from or brought onto the set. This movement needed to be achieved relatively quickly (and quietly) to facilitate fast, uninterrupted set changes. They were also working with frosted Plexiglas with double-sided light boxes that you could see through, and needed to hide the linear motion control system in the side of the upper wall in a space that only provided a few inches in which to work.

Ultimately, the system needed to be small enough to fit within an eight-inch footprint, yet powerful enough to lift and lower a thousand-pound load. Essential to Nook's engineered solution was increasing the diameter of the lead screws and using a steep pitch thread pattern to provide the speed that was needed. Additionally, utilizing an oversized 50 mm shaft ensured that the screw would not vibrate or resonate while turning. The specially reconfigured 50 mm ball screws were then mounted in the sides of the upper wall.

To drive the screw jacks, the system incorporated a 2HP-AC electric motor that raised the ball nut on the lower wall, and lifted the wall completely. According to Mark Ewing, CSSI's head of automation, "We were able to automate every moving system, including the screw jacks used on the podium backing monitor walls, by tying them back to a PLC control with touch-screen integration. Ultimately, the system did an excellent job of driving electrical and mechanical systems to control 19 separate points of motion from a single location."

Nook's engineered screw jack solution met CSSI's tight deadline and budgetary demands by using ActionJac screw jacks stocked as inventory to support the initial application of the company's new stage automation system. According to Ewing, "There were not any standard systems that could accommodate an eight-foot travel length in such a small space. Nook provided us with specially configured ball screws with a custom length and diameter that provided an effective solution that worked perfectly for moving the podium backing monitor walls-just like we expected." 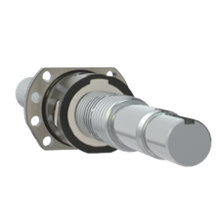