As a leading designer and manufacturer of airline maintenance stands and docking systems, Uni-Systems was one of several companies to respond to a request for proposal from American Airlines to develop a sophisticated maintenance docking system for its Boeing 777 and 767 class aircraft. To keep commercial passenger jets functioning safely, commercial airline companies perform regular maintenance and annual overhauls of every plane in their fleet. While regular maintenance is often performed in a hangar or on the tarmac, yearly overhauls require sophisticated equipment to provide maintenance workers with safe, ready access to every part of the plane, from the nose, fuselage, and tail to the landing gear, stabilizers, and wing tips.

Although Uni-Systems had developed numerous maintenance stands and docking systems for several domestic and international air carriers in the past, American Airlines, the world's largest commercial airline, was a new customer and the Boeing 777s were an entirely new class of aircraft. Prompted by a desire to win America's business and break new ground on a new class of planes, Uni-Systems developed an innovative new maintenance docking system and secured the contract, according to Mike Becker, lead mechanical engineer on the project.

A New and Innovative Design

"The new maintenance docking system is the culmination of all our past efforts combined with many new design ideas," Becker explains. "While we've developed several 'docks' of similar concept, this one was a major design revision and included many innovations over previous designs. This version is much easier to operate." Maintenance docking systems are structures designed to provide worker access to the entire plane and deliver utilities to every surface of the plane without the need for a safety harness or lift.

Because 777s and 767s are so large, many sections of the docking system had to move vertically and horizontally to allow the plane to enter and exit the docking system and to provide better access for maintenance activities. The docking system, with a total weight of 1.2 million pounds, has many moving sections, including the 156-foot-long bridge, adjustable platforms, sliding decks, and push boards.

For facilitating the movements of the various sections of the docking system, Uni-Systems investigated available three-inch and four-inch ball screws for longer distances, Becker says. The company selected Nook ball screws because they were the most efficient mechanisms for moving various dock structures under heavy loads, required the least amount of horsepower to operate, provided the most reliable safety features, and were the most cost-effective.

"Reliability was of prime importance on this project," Becker notes. "If there is a problem in the hangar, we have to be able to de-dock the plane in under 20 minutes. The four Nook ball screws that raise each of two sections of the bridge, a long horizontal tube that runs the length of each side of the plane, have to move this 400,000-pound structure very quickly to meet that requirement. The Nook components offered the best combination of efficiency and low-power requirements at the best price."

In addition to the 20-minute de-docking requirement described above, both American Airlines and Uni-Systems had questions and concerns regarding the safety of the dock-lifting mechanisms, especially the four ball screws that lift the main bridge, a load of 100,000 pounds per screw. Ball screws are similar to ball bearings in that loads are carried on rolling balls.

"The question came up of what happens to the stand, the plane, and all the people working on it if a ball falls out of a ball screw assembly," Becker recalls. "When you look at the docking system, you realize that the ball screws are the only things that are holding the bridge up. As part of our investigation of viable lift systems, we had evaluated three or four motion control companies and narrowed it down to Nook Industries and one of its competitors. We were interested in finding out if the two companies offered any safety features related to the integrity of the screw itself.

"The folks at Nook explained to us that there's a built-in safety feature on their ball nuts," Becker adds. "They have a safety feature in the nut consisting of an acme thread that fits with clearance inside the rolled thread on the screw. Were we to lose balls, we can rely on this emergency safety thread to hold the load in place. The other company also offered a safety mechanism, but we felt that Nook's safety feature was better. We also were very careful to load the screws in tension and provided a mechanism to keep the screws from going into compression." 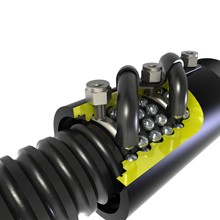